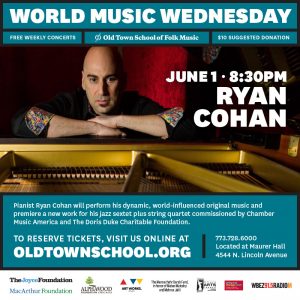 I am very excited to be debuting a new suite of music entitled Originations Wednesday June 1st at the Old Town School of Folk Music with a 10-piece jazz chamber ensemble formed by my sextet plus The Grant Street String Quartet! Comprised of four connected yet distinct pieces, Originations features a synthesis of Middle Eastern and other World Music influences, Classical compositional elements and jazz improvisation; all of which, in essence, reflect my own musical and cultural origins. The group includes the stellar talents of John Wojciechowski, Geof Bradfield, Tito Carrillo, Lorin Cohen, Juan Pastor, Jennifer Leckie, Eric Pidluski, Bonnie Yeager and Kerena Moeller. In addition to the June 1 world premiere event, we will also be performing the new work on Friday June 3 at The DePaul Univeristy School of Music at 5p.

Originations has been made possible with support from Chamber Music America’s 2014 New Jazz Works: Commissioning and Ensemble Development Program funded through the generosity of the Doris Duke Charitable Foundation. 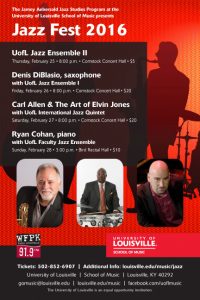 I am thrilled to be working with the University of Louisville’s esteemed Jamey Aebersold Jazz Studies Program as their Artist-in-Residence for the entire winter/spring semester. In addition to teaching their piano students, I will be coaching their ensembles and performing with the Jazz Faculty at the 2016 U of L Jazz Festival. 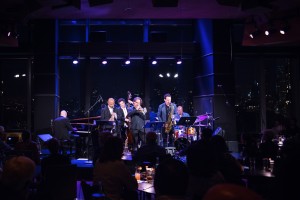 Had an INCREDIBLE time playing with my sextet at Dizzy’s Club Coca-Cola at Jazz at Lincoln Center in NYC a couple weeks ago! I was very fortunate to have some of my favorite musicians performing my music including Steve Wilson, Alex Sipiagin, John Ellis, Lorin Cohen and Donald Edwards to a large and enthusiastic audience in this amazing venue. Thanks to all that came out!! Here’s a few videos from set… 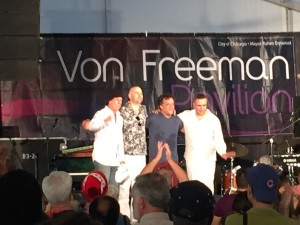 Had a fantastic time playing at the Chicago Jazz Festival last weekend with my quartet featuring Joe Locke, Lorin Cohen and George Fludas. The band was on fire and we were thrilled to be received by the enthusiastic, capacity crowd with an extended standing ovation. Here are a few brief video clips from the set…

Ryan Cohan Sextet at Jazz at Lincoln Center on September 16!

I am thrilled to announce that I will be playing at Dizzy’s Club Coca-Cola at Jazz at Lincoln Center in New York City with a newly assembled sextet on Wednsday, September 16! We will be playing my original music from my last three Motéma Music album releases The River, Another Look and One Sky and the group will feature some of my favorite East Coast musicians; Steve Wilson on saxophones and flute, Alex Sipiagin on trumpet and flugelhorn, John Ellis on saxophones and bass clarinet, Lorin Cohen on bass and Donald Edwards on drums. I hope you can join us for this special event which is part of Coca-Cola’s Generations In Jazz Festival! Sets are at 7:30p and 9:30p. If you are unable to be with us in person, this concert will also be streamed live at Jazz.org/live!